Attended a ROS(Robot Operating System) and C++ Workshop given by Professor Miguel Oliveira, which will be very useful for the development of my project.

In this workshop each participant would have to develop his own software module. Each module representing a player which would play a game according to the code written by the participant. The game is called Team Hunt.

The game is composed by 3 teams, team Red, Green and Blue. Players from a team must hunt players from another team, and at the same time must evade players from a different team, e.g. team red hunts team green that hunts team blue witch is hunting team red. Players may also never leave the arena represented in yellow, as it is possible to see in the next figure, or they will die. 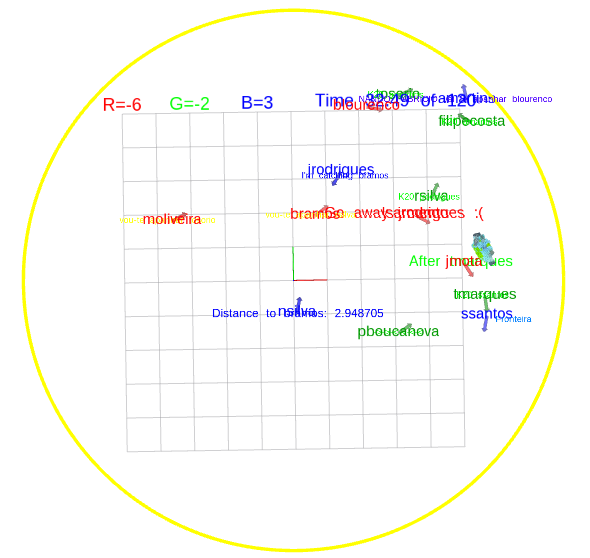 In the link below it is possible to see a video of the last game played by all of the participants.

This workshop was also helpful to increase my skills using the GitHub platform.

Besides the workshop this week was also dedicated to do some initial research and to write the preliminary report. This was important for me, not only, to introduce myself to the process of bin-picking and the projects that have already been developed in this field, but also, to organize my thoughts in tasks to come in this project.